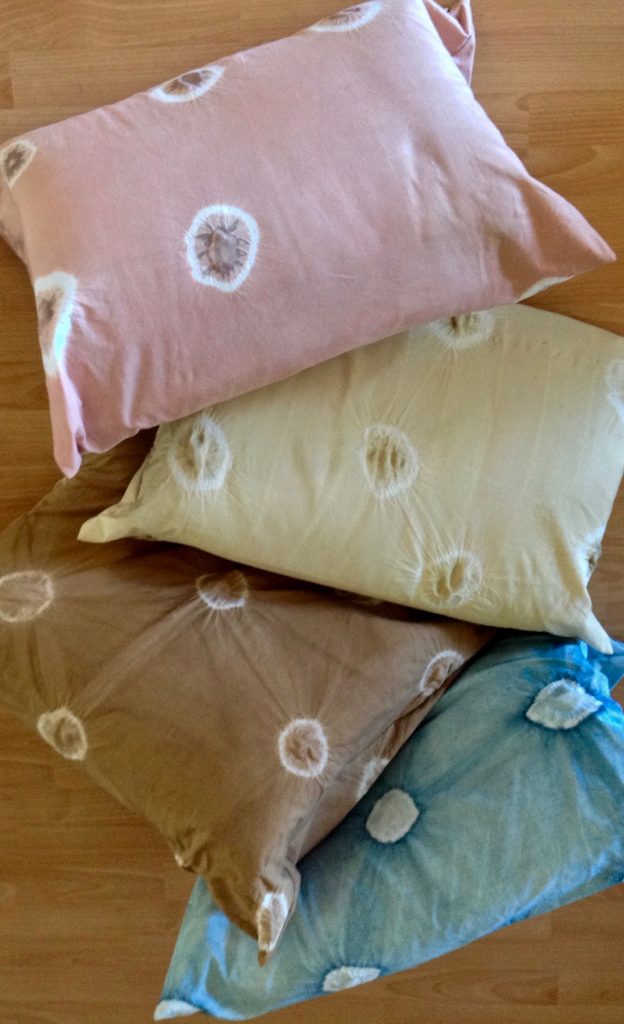 Late summer and early autumn in my area yields a bounty of plants, such as Sumac, Goldenrod and Walnuts suitable for natural dyes. I set out to harvest these plants with the intention of making dyeing pots. My project was the making of cushion covers, with which to recover old lawn chair cushions.

My first attempts with natural dyes were those made with onion skins, coffee, avocado pits & skins, purple cabbage and beets. In other words, using the edibles I had on hand in my kitchen at the time.

Both the onion skins and avocado made lovely shades of brown and pink. The beets also turned  out a nice pink tone and the cabbage was a bluish purple.

However, both the cabbage and beet colours were very pale when I airbrushed them on paper and on fabric.

Furthermore, I followed some erroneous advice, which was to put the fabric out in the sun. This was supposedly going to set the colour. Wrong. As it turned out, the sun completely bleached out the colours! All that remained was the coffee dye and a ghost of pink from the beets. Lesson learned-don’t believe everything you read, unless the information is proven and from a reliable source.

My first pot of dye was Sumac berries. Together with my friend, we cut the cones of Sumac berries. They were a bright ruby colour and smelled delicious, as they bubbled away on the outdoor cookstove.

The cones were boiled in a large steel pot for over an hour; then we poured all the detritus, into a sieve. The resulting broth was a lovely wine colour.

As I had read previously, sumac is a natural mordant, therefore we did not mordant the fabric ahead of time.

In the meantime, we wrapped small beach stones on the fabric, using elastics. I selected a fairly heavy cotton fabric, which I had previously used during my Indigo/shibori workshop.

Before immersing the tied fabric, we sprayed it with water. The dye was returned to a boil, we put the fabric into the pot, then the temperature was lowered to a simmer. We left the fabric, in the pot, turning it on occasion, for 2 hours.

After that time, it was removed and hung outside to dry.

We were quite pleased with the result. The colour was a dusty rose. An added bonus was a dark, star shaped imprint, left by the beach stones, in the middle of the white, tied sections.

Later, we followed the same process with Goldenrod blossoms and Walnut husks.

As the stones were reused, they left less of a mark in these subsequent experiments.

The Goldenrod yielded a warm, subdued shade of yellow. And the walnut husk colour was of medium chocolate brown.

I dyed one more piece of fabric, using my Indigo vat. The colour was nowhere near as strong as it had been a month earlier. However, it was a very pleasing light blue.

I will reconstitute the vat and use it once again.

*4 years later- the Sumac cushion has turned a dusty pink and the Indigo cushion has faded a bit. Both were used outdoors for a summer, but since then, they have been kept indoors. The Goldenrod and Walnut were left outdoors in rain and sun and both have faded substantially. At the time, none of these fabrics were mordanted. But I’m a bit surprised that the Walnut dye faded substantially. 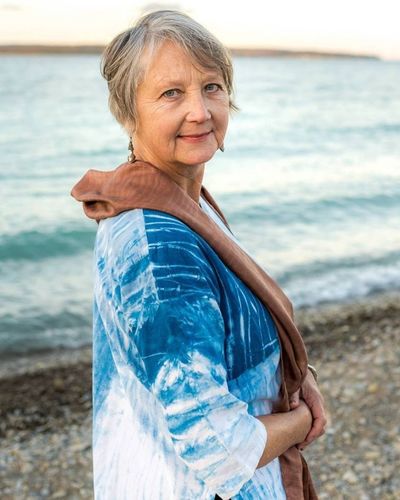 Producer of one of a kind fabrics, I am a Visual/Textile Artist at MaiTribe Studio Gallery, in central Ontario, Canada.

My life and art have been inspired by my travels  to countries such as Thailand, Laos, Vietnam, Bali and India.